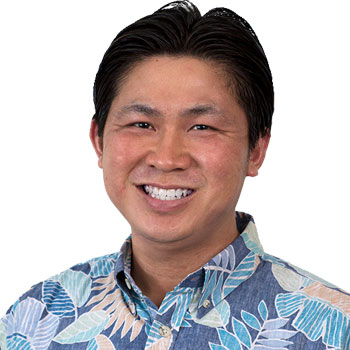 Ryan Oda is a veteran Real Estate Advisor with Forward Realty, one of Hawaii’s top boutique real estate firms. Since joining the real estate industry in 2013, Ryan has earned numerous accolades for his personal approach to client service.

Ryan specializes in residential and commercial sales. No transaction is too big or too small for him; he enjoys meeting the needs of the everyday buyer and seller. His niche is millennial, first-time homebuyers. In addition, Ryan has vast experience in trust sales and 1031 Exchanges.

At Forward Realty, Ryan was instrumental with the rebranding of the company in 2017. He also has trained and mentored the firm’s new agents and summer interns. In addition to his personal sales, he is a member of Forward Realty’s top real estate team. Together, Greg Andrasick and Ryan bring a client-focused team approach to real estate sales and they have collectively closed tens of millions of dollars in real estate transactions.

By developing a unique marketing strategy for himself, other business professionals have engaged Ryan to learn more about social media strategies. His clients range from a local non-profit to a political campaign. Ryan is also the Social Media Director for Forward Realty.

Born and raised in Honolulu, Hawaii, Ryan is a proud graduate of Iolani School. Ryan later continued his studies at the University of Hawaii at Manoa. Upon receiving his bachelor’s degree, Ryan obtained his master’s degree from the University of Southern California.

Ryan remains active in the community. He’s a volunteer football coach at Kalani High School, he’s a class representative, and affiliated with The KA’I Program at Iolani School.

For many, a real estate purchase may be the biggest purchase of their lives. As a result, the buying process can seem daunting and difficult…
Read our Steps to Buying

Selling can sometimes seem like an overwhelming process, but with our help… it doesn’t have to be. With our expertise and strategies…
Read our Steps to Selling
The Forward Process